Jackson Group offers value based, professional environmental consulting services. The firm primarily focuses on Section 401 and 404 permitting, environmental studies for threatened and endangered species, and benthic macroinvertebrates. Let us use science to solve your problems!

In 2006, after serving in the 82nd Airborne, obtaining a Master of Science Degree in Biology at Arkansas State University, and years of professional environmental consulting experience, Jeremy Jackson decided that it was time to work for himself instead of others. He evaluated the quality and cost of services offered by numerous environmental consulting firms and felt that the prevailing trend in the environmental services market was shifting away from professional services to being treated more as a commodity. He believed and still does that anytime you shift away from offering value based professional services to a commodity or cost based service, quality declines. Commodity based markets are very competitive, and though the cost of services are often lower, the decrease in cost will often result in a decrease of quality, an increase of mistakes, and the greater likelihood problems will develop throughout the course of a project. It’s a vicious cycle.

Jackson Environmental’s first office was a small three room facility, located in downtown Richmond, Kentucky and was staffed by three persons. The first year was a trying experience, because Jackson Environmental was offering value based services in a market that was in part shifting to a commodity based system. Although there were times during the initial year where he felt the need to drive down costs to compete against similar size firms, he resisted. 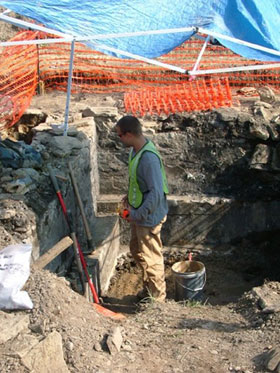 In fact, when confronted with shifting to a commodity based system or shutting his own doors, on a leap of faith, Jackson Environmental increased its value per unit cost. Because of his passion and unyielding belief that a value based system produces a better quality product, he has never looked back. In 2008, as a result of its business model, Jackson Environmental out grew its office and moved to a larger 4000 square foot facility in Richmond, Kentucky.

During these early years of operation, Jackson Environmental was constantly working and developing its culture, defining what it was going to look like as it grew. One of the greatest transitions in defining Jackson Environmental’s culture occurred during the recession. While staying focused on offering and maintaining a value based services, Mr. Jackson focused on not competing with other companies, but developing beneficial relationships. He firmly believes that strong reciprocal business relationships are paramount to success in this environment. While other firms staff up to win projects as a way to get the biggest piece of the pie in the highly competitive commodity based market, Mr. Jackson controlled his growth by developing strong relationships where firms could grow together by teaming. He truly believes in working with firms in a reciprocal relationship.

In 2013, Jackson Environmental’s business model of offering valued based services and excellent teaming partners gained momentum and yet again outgrew its office and moved to a larger 14,000 square foot facility with an expansive laboratory space. In addition, Jackson Environmental Consulting Services, LLC changed its name to Jackson Group, in response to its expanded services of cultural resource management and other future services. Jackson Group has projected its growth trend will continue into 2014, with new offices planned in additional states.

Over these last 8 years, Jackson Group has developed a special niche of being problems solvers. Our tag line is simple, “We use science to solve problems”. Jackson Group’s special skill of solving problems extends from its employees, which are fundamental to its success. Jackson Group’s employees and other company team members are an extension of Mr. Jackson, which is how he has developed and maintained the culture at Jackson Group. By training every staff member to be a leader and challenging them along the way, each have and will continue to accomplish extraordinary things.

Over these last 8 years, Jackson Group has developed a special niche of being problems solvers. Our tag line is simple, “We use science to solve problems”.

This philosophy allows Mr. Jackson and all members of Jackson Group to follow their mission statement, which is simple: “To be Exceptional”.